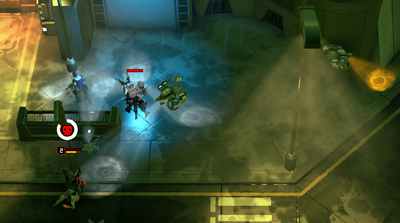 Enemies are characters that will investigate, assault, detain, and fire on anyone who is behaving suspiciously.

In a world ruled by mega-corporations, each maintains its own security forces. Since the police have been privatized, corporations take on police contracts and the same corporate forces patrol the streets as guard private compounds.

Enemies have flash lights pointing in front of them. These lights are normally white, indicating they are not on alert. If there is any disturbance in the unit's area of awareness, the light turns orange and the unit will begin to move more quickly.

As the game progresses, new types of enemies will be added to the game world, and eventually, existing enemy types will begin appearing with better equipment. This is based on the game's calculation of how strong the agents are based on their skills and equipment.

Dracogenics troops are by far the most numerous and generally considered the "normal" enemies encountered. They wear white and blue uniforms.

Uzy Korp was founded by three Russian mafia groups that saw that the winds of power were changing in favor of megacorps. They decided to band together and form a (more or less) legitimate megacorp of their own.

The forces of Uzy Korp can be identified by their red uniforms, except for their Commanders, which wear yellow. They have more armor than Dracogenics soldiers and have a preference for plasma weapons.

The Eternals are typically seen guarding City Security Authority compounds. Most of the forces belonging to the Eternals are identical to those of Dracogenics, apart from their purple garb. The fact that both their Commanders and Uzy Korp Commanders wear yellow can cause some confusion if they're alone.