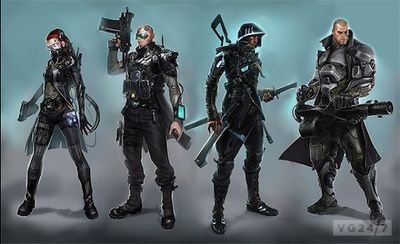 Agents are the instrument of your fight for supremacy in the brutal world of Satellite Reign. Agents are player controllable characters that can be outfitted with augmentations, gear, and weapons; they may also be altered with Clones and and specialized with skills.

The squad is comprised of 4 different agents, each with their own class:

Every agent's Accuracy stat can be increased with Augments or Clones.

Every agent's Speed stat can be increased with Augments or Clones.

Agents will Melee Attack automatically when an agent is within kicking range on their target. Melee attacks will interrupt the target's actions, such as attacking, reporting, or running away.

Every agent can hack

Terminals, use a zip line, or hardwire a power station if the force command (Alt+right click) is given, but most will fail unless they have the skill or equipment. Those who do, have a 100% chance. 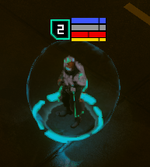 Shields - Shields, represented by the top blue bar, are the first line of defense. Shields regenerate fairly quickly, but only when not taking damage. They're weak against laser weapons and strong against plasma weapons. (Gas will bypass shields.) Shield regeneration can be increased with Gear. Being next to a

Armor - Armor, represented by the middle gray bar, is the next line of defense. Armor takes less damage from ballistic weapons and less still from laser weapons. However, it takes a beating from plasma weapons. (Gas will bypass armor.) Besides the body armor itself, armor capacity can also be increased using Augments. All body armor provides some minor passive repair, but there are no Augments or Skills that increase it, so it will always be slow. Being next to a Relay Beacon will rapidly repair armor.

Health - Health, represented with a red bar, is the last line of defense, represented by the bottom red bar. When it runs out, death occurs. All weapon types (ballistic, laser, plasma) perform roughly the same against Health. Health capacity and regeneration can be increased with Augments, Skills, and Clones. Being next to a Relay Beacon will rapidly heal the agent. The Support agent excels at healing skills.

Energy - Energy, represented by the yellow bar, is used for sprinting and using abilities. Many actions will deplete energy including running, cloaking, activating abilities, and other actions. Energy capacity can be increased with Augments, Gear, Clones, and the Leadership skill. Energy regeneration starts out slow, but can be increased with the aforementioned methods. Being next to a Relay Beacon will rapidly recharge energy.

If an agent's Health is reduced to zero, they are down. A timer begins to count down and they may be revived during this time by another agent. This agent must be adjacent to the downed team member to revive them. The helping agent is susceptible to being spotted and attacked. They cannot attack or use abilities, but a

Cloak can be maintained.

If no agent can revive them in time, the downed agent's consciousness will automatically be stored for implantation in a new "Clone" that can be delivered at a

Relay Beacon. A cloned body will degrade each time it is remade. Once the revive timer is spent and the agent dies, another timer begins that delays the ability to respawn. Once that timer is over, a final timer starts that is based on the agent's "cost." Augmentations, Weapons, and Gear increase the respawn cost and time. An agent can be revived instantly at the cost indicated. This cost counts down until zero. When the cost hits zero, the agent can be respawned at any time for free.

By default, all skills will carry over to the clone upon respawning. However, in Ironman Mode, all Skills and experience are reset to zero at respawn.